This interview was recently published in Revive Magazine:

Recently, the Lord allowed me (Dan Jarvis) to visit India to help India Gospel League train village pastors. It was one of the most defining moments of my spiritual life, and I now agree with the adage, "The American church needs India more than India needs the American church"! Revive was able to ask Pastor Samuel Stephens some questions about how God is working in India. ﻿ 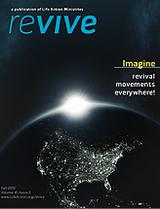 
Spiritually, what is happening in India today?

Samuel: India is definitely experiencing a great spiritual awakening. We saw the first wave in the late 1970s when the gospel was reaching areas that had never heard of Christ before. Large numbers of people began responding to evangelism efforts. This continued through the 80s and 90s. During this period, the Jesus film was used extensively. Miracles were almost the norm in these new areas, heightening people's receptivity level. The church grew rapidly during these years.

In 1992 the India Gospel League initiated a church planting movement called Vision 2000. The goal was to plant 1,000 churches by the year 2000, through the ministry of 200 church planters. Over the next eight years, the number of church plant­ers involved in this initiative as well as the goal kept growing, until over 20,000 churches were planted. Now, ten years later, more than 60,000 such churches have been established in previously unreached villages, and other ministries are also experiencing dramatic results.


With such rapid growth, how do you help the new believers grow as disciples?

Samuel: Enormous numbers of new believers must be discipled. The challenge is first to help them come out of a very dark religion filled with evil practices and superstitious beliefs. Then, as they understand the Christian faith, they need training and equipping to effectively communicate it with others. The fact that a majority of them have very limited literacy makes the task more difficult and complex.
Our ministry has developed a systematic, multi-level Christian education program that is carried out in all the local churches. Leaders are trained and equipped to teach others through small groups and regional conferences.

What factors have brought India to such a place of spiritual openness and church growth?

Samuel: Prayer is the first and foremost factor. A lot of focused prayer was mobilized during this period.
Indigenization of the church, I believe, has been another important factor. Starting in the mid-90s, Western missionaries had to leave because of grow­ing opposition and persecution.
As a result, personal lifestyle evangelism by believ­ers became the norm! Christianity has come to be accepted as an indigenous faith lived by the locals rather than a foreign religion to be mechanically propagated.


What personal sacrifices do the individual church planters make?

Samuel: The church is growing today on the foundations of real sacrifice by thousands who are committed to this pioneering enterprise. They have a deep, unwavering sense of God's call on their lives to move into difficult and remote areas, with the vi­sion of seeing the gospel planted in those communi­ties. They exist on the bare minimum of life's physical requirements. They walk and move by faith, daily trusting the Lord to provide for every need.

Many face persecution and tribulation. They are beaten and physically and emotionally abused, and they live under constant threat to their lives. Their steadfast obedience to God's call to ministry is so great that they are willing to sacrifice their very lives. The Lord is using them and their witness powerfully in both life and death.
Two days ago, I prayed with a pastor and his family whose house and belongings had been burned. But the family has refused to move away, believing that God has called them to minister in that region. This is not an uncommon testimony.


What is a typical prayer meeting like? What type of requests do the believers bring before God?

Samuel: Christians, especially the new believers, are very committed to personal and corporate prayer. The leaders' lives and ministries are im­mersed in prayer and fasting. These people regularly spend up to several hours in prayer every single day. They often fast and pray several days in a month. Every church has at least one monthly gathering for all-day and all-night prayer. When they pray, they cry out to the Lord in sincerity and faith.

Most of the prayer requests are centered around revival of the church, ministry-related needs, per­secution, redemption of the community, concerns for the nation, etc. Prayer for individual needs and healing are low on the list of prayer priorities.


What advice can you give believers doing God's work in areas unresponsive to the gospel?

Samuel: First of all, it is time for the church to seek God's face and find out where we have gone astray. We need to seek God's wisdom in helping us break free from some of our traditional ways of thinking and patterns of doing ministry.


It is my observation that some of the methods we have adopted for presenting the gospel have, to some degree, turned people away. They are either obsolete or simply inappropriate. Of course the timeless message never changes. But methods must change according to the context and the times in which we live. If God is inviting us to move in a different direction, are we willing and ready?
Another important New Testament lesson that the church needs to adopt once again is to engage every believer in mission. I believe that training and equipping believers for everyday ministry and witness is critical.

Samuel Stephens is the president of India Gospel League, a large church network that is multiplying among the unreached, rural villages of India. Learn more at http://www.iglworld.org/.
Email ThisBlogThis!Share to TwitterShare to FacebookShare to Pinterest
Labels: Media, Reports

CTC's current goal is to help India Gospel League send 1000 church planters into the unreached villages of India. 134 of these have been sent! There are a few hundred church planters awaiting sponsorship - could you sponsor one?

Stats from The Joshua Project